In 2016, the market of new passenger cars kept growing in European Union (EU) and achieved new heights. In 2016, the new passenger car registrations showed a consistent increase (+6.8%), totalling 14,641,356 units and marking the third consecutive year of growth in the sector.

This positive trend is a sign that despite political instability and economic uncertainty following key events in 2016, such as Brexit or the Italian referendum, consumer confidence has remained robust. The growth recorded throughout the year was largely sustained across the whole region and in all major passenger car markets.

2016 marks an impressive growth in Latvia!

Latvia, according to data from ACEA(European Automobile Manufacturers Asociation), had 18,8% growth, one of the biggest in EU, equaling 16359 new cars. The biggest increase was in February – 49,5% more than in 2015. If we look on numbers, the most cars were sold in June – 1953 new passenger vehicles, followed by March and September, 1574 and 1560 cars respectively.

“Auto Asociācija”, a car association in Latvia, explains it with increased leasing activity in the market, increase in re-export, Government purchase of cars for police and new vehicle models in the market. 2016 was rich with new or rebranded automobiles. And it vastly encouraged activity of private sector in the market.

Association forecasts that in 2017 growth of the market will be moderate and will reach 19500 units of passenger cars and light commercial vehicles. The government purchase is still active, also CO2 friendly taxes will motivate establishments to supplement their car parks with fuel efficient vehicles.

When compared to our neighbours, we are still chasing. Estonia, the smallest country of Baltics in population, is the leader with 22429 new passenger cars in 2016.  That’s a 10,2% growth. Lithuanians have made a step closer to Estonians – 20320 new cars registered, an impressive 18,9% increase. Estonia’s dominance is proven by another data. In 2015, 15 new passenger cars per 1,000 inhabitants were registered in Estonia. While in Latvia and Lithuania this number is 7 and 6 respectively.

Improving customer activity in the Baltic states shows that automotive logistics company “Kurbads” will face new challenges on it’s way to satisfy needs of all clients with a qualitative vehicle transport service.

The Volkswagen brand is an undisputable leader of car market in Latvia for several years. In 2016, it ranked first with 2185 cars sold. Toyota is in strong second with 1789 units. But there is a serious battle for next positions as Nissan with 1448 cars is closely followed by Škoda with 1354. 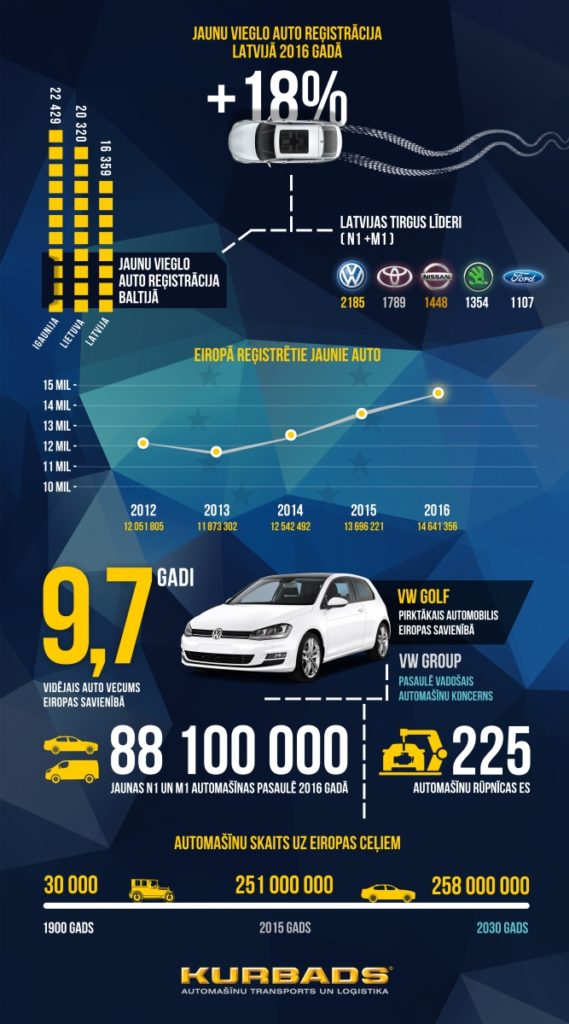