Fifties in the United States of America – the age of economic boom when legendary huge vehicles were built and some of them have become the classics of car manufacturing and an important catch for collectioners. Two of those cars – Edsel “Villager” and Pontiac “Bonneville” – recently were transported by  logistics company “Kurbads”.

When you see the Edsel “Villager” and Pontiac “Bonneville” for the first time you don’t have any doubts about the origin of the cars – flowing lines, big dimensions, round lamps and sofa as a seat. True American dream!

The Edsel Villager was a station wagon produced by the former Mercury-Edsel-Lincoln Division of the Ford. The brand had a really small life span ranging just three years (1958-1960). Because of the bad marketing and incomplete market research the Edsel was a financial disaster for the manufacturer. It was the wrong car at the wrong time yet it is a unique car nowadays.

Only 8000 units of six passenger Edsel “Villager” vehicles were built. American press at that time wrote: “American bison lazily tossing its massive head”. The family car is powered by 5,9L V8 carburetor engine that is able to deliver 303 HP on the drivetrain. The vehicle has a 3 speed automatic gearbox. Approximate price in the 1959 was around 2900 USD.

Few words from “Kurbads” driver’s quality manager Anatolijs Vasiļjevs: “Edsel has a very long wheelbase – more than 6 meters. We carefully have to check its specific width. When the engine has just been started one has to manually increase fuel input in the engine by pulling the special pin. It is hard to imagine such things nowadays. It’s in perfect condition!

Pontiac “Bonneville” from 1959. As US press wrote back then: “Pontiac turned the corner around with the “Bonneville”. Manufacturer was no longer the older, gawky brother of the Chevrolet.”

By holding on to American car manufacturing traditions, “Bonneville” has a 6,4L eight cylinder engine with 300 HP power output. Four speed automatic gearbox.  Two door coupe’s weight is 1850 kg. The price in 1959 was around 3,200 – 3,500 USD depending on specifications. In 2015 those cars especially cost much more.

Anatoly who has an extensive experience with different cars comments: “Even more bigger and heavier then Edsel. But feels more dynamic and powerful. When unloading you have to be extremely careful – i suggest unloading using only mirrors. In total the car is super comfortable – seats are like a sofa. The chassis is really soft, have to drive careful because the car doesn’t have the stabilizers as modern cars, but the grip is terrific.” 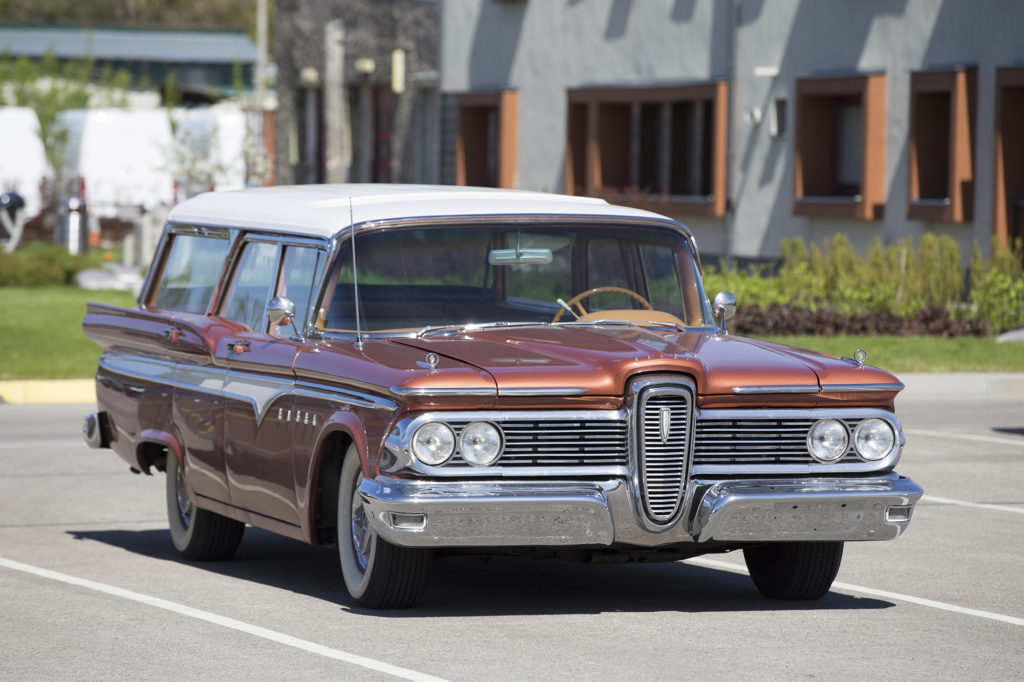