Car market overview in Latvia, Europe and the world in 2020

The past year has been full of change and challenges. Not only Latvia, but the whole world was affected by the COVID-19 pandemic wave. As a result, every industry suffered, including the car market. From March, when most European car factories closed, with a sudden increase in new cars and a shortage of warehouses.

Fall in all Baltic countries

Undeniably, a drop in new car registrations was expected. According to the data of the Road Traffic Safety Directorate (CSDD), in 2020, 13720 cars were registered in Latvia. This is 26% less than last year – in 2019, 18,529 units were registered.

The annual leader Volkswagen is surpassed by Toyota and Škoda. Namely, the Toyota car brand ranks in the honorable first place with 2065 first registration cars. Škoda takes the respectable second place, with sales increasing by 8% or 1949 units. In turn, the sales volume of Volkswagen car brands decreased by 1301 units, this year 1758 units were registered.

Toms Hartmanis, the head of the logistics department of the car transport and logistics company Kurbads, comments on the past year: “Last year was full of challenges in the car market.

As a result of the first wave of the pandemic, car production was stopped in most parts of the world, and the plans for 2020 were far from being achieved. With the resumption of production, the industry faced the following challenges: a shortage of parts, as no one could have foreseen the shortage so large that they would be ready to resume operating 100% after the cataclysm. The industry recovered to reasonable levels only in the last quarter of the year. The car market, although insufficient, adapted quickly, and strong growth was observed in the used car segment, which partially offset the already unattainable volumes in the car market. This can also be seen in the market proportions – with the exception of the private sector alone, there is even growth, but the overall market is in deep decline. ”

The most dynamic purchase of new cars last year was observed in July, 1507 units. However, compared to July 2019, the activity is lower by 13%. The COVID-19 pandemic hit Latvia in full in March and April, when the number of registered new passenger cars also decreased by up to 58% compared to 2019. The electric car market is celebrating its victory, with a 278% increase in 2020. That is, 323 new units, which is a major breakthrough compared to 90 units in 2019.

Neither in Lithuania nor in Estonia is the overall picture of new car registrations brighter. However, in our neighbouring countries there isn’t such a big drop as in Latvia. In Lithuania, new car registrations have fallen by 13%, to 5,968 units. Unfortunately, the new car market in Estonia has been hit hardest by the COVID-19 pandemic crisis. Namely, the decrease is 29%, that is, 7839 units.

A massive drop in Europe; undeniably dominated by Volkswagen

Both the industry and the car market were severely affected by the constraints of the COVID-19 pandemic. Especially in March and April, when the factories closed and there was an absolute blocking of work. Dealers reacted quickly and suppressed new order quantities by deciding to sell the cars in stock. Undoubtedly, the car sales market also reached the next level, had to adapt to the conditions and start using e-commerce opportunities. As they could not go to the showrooms to see the car or enjoy the test drives, the dealers had to face a restructuring of their work.

The automotive sector is still dominated by the Volkswagen Group, which, despite the circumstances, managed to increase its market share to 25.4% (24.3% in 2019). Although Volkswagen’s new car registrations in particular fell by 24.5% (1.34 million units). Other manufacturers in the VW Group are also experiencing a significant reduction – Škoda – a decrease of – 15.7%, Audi – 19.2%, Porsche – 7.6%.

The most popular car brands in Europe in 2020 are undoubtedly Volkswagen, Renault and Peugeot. Toyota, which is so popular in Latvia, ranks only in seventh place.

In general, the situation is tense, both globally and in Europe 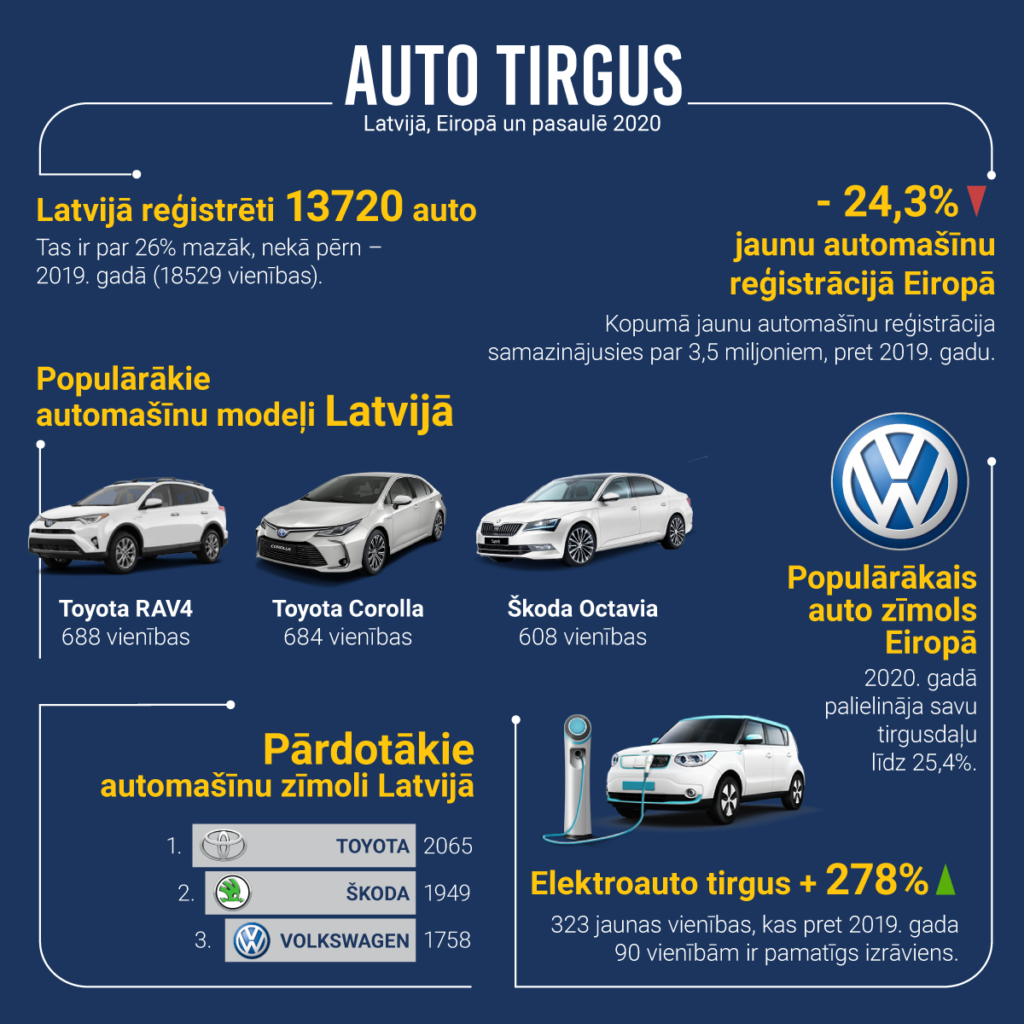