Knight Rider, a shadowy flight into the dangerous world of a man who does not exist.

Michael Knight, a young loner on a crusade to champion the cause of the innocent, the helpless, the powerless in a world of criminals who operate above the law.

These are the words that are told at the beginning of the intro of “Knight Rider” TV show that was remarkably popular around the world in the eighties.

Success of the show is hidden in fantastic innovative technologies for that time – indestructible, hi-tech car named KITT that has artificial intellect including emotions, mood, character and of course power of speech in human voice.

Vehicle transporting and logistics company “Kurbads” recently had an opportunity to transport star of the show – KITT. Sadly it was not the original, but perfectly built copy of it. Although with the same character as KITT made some jokes during the loading process.

“Kurbads” driver’s quality manager Anatolijs Vasiļjevs about KITT’s behavior: “I had an agreement with KITT that he will stand still, while I go get a refreshment. When I looked out the window…” To know more, we advise you to see our upcoming video.

Needless to say that former policeman’s, the Knight Rider’s, role was played by David Hasselhoff who still has strong ties with this role. He is also well known for his acting in the TV show “Baywatch”.

The KITT is based on Pontiac Firebird Trans AM vehicle. KITT’s transmission was an eight speed microprocessor turbo drive with autopilot (which allowed the car drive without any passengers). It accelerates to 100 km/h in just 0,2 seconds, but full stop takes just 4 meters. Despite the impressive dynamics car’s fuel usage was superb – 1,5 liters on 100 km. 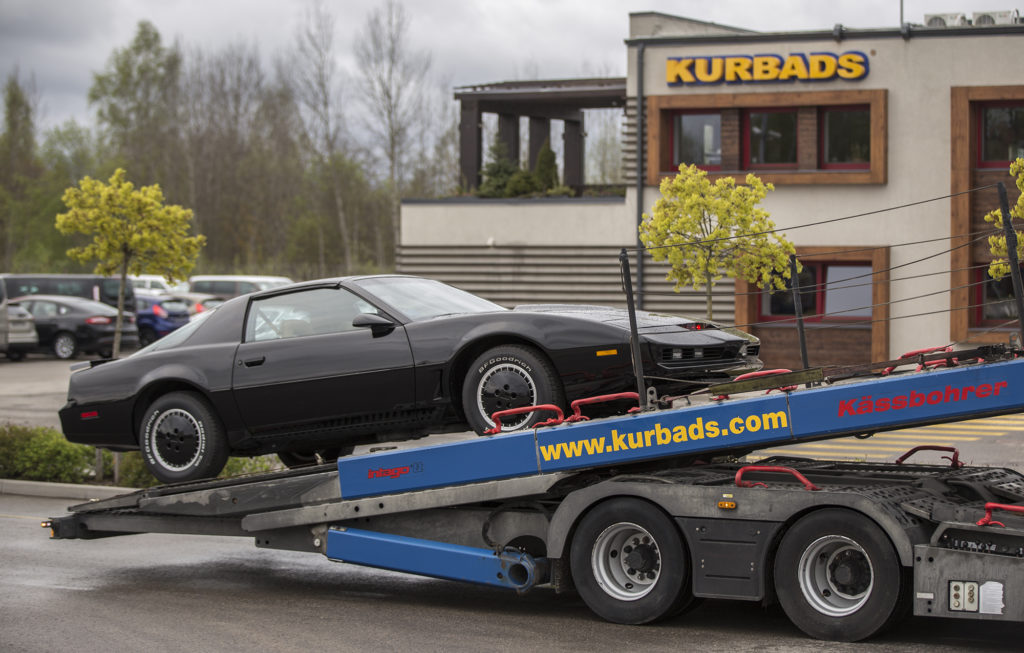