“Kurbads” is the first company in Latvia and Estonia that has bought Volvo truck with these specifications. Southern neighbours Lithuanians have already received several vehicles.

Driver’s duties have been entrusted to experienced Normunds Strazdiņš, who has earned this honor thanks to successfully reaching 1 000 000 km milestone.

“I would say that the biggest gain is the adaptive cruise control that allows to maintain the same distance as the vehicle up front. This system also reduces speed of the car carrier to increase distance, if some other vehicle has pulled in front with quick maneuver,” tells Normunds Strazdiņš, driver of the newly acquired truck.

“I had the honor to drive this car carrier from factory. At every stop I opened manual and read about new systems,” laughs Normunds. He admits that his work efforts are rewarded: “I was driving old model for seven years without any problems. Management appreciated my work’s quality and rewarded me with a new truck.”

Pēteris Ozoliņš, “Kurbads” driver quality’s manager” notes: “Thanks to the new equipment, which unites best qualities of “Variotrans” and “Metago”, driver’s job has been made a bit easier. Loading possibilities have also been improved and we can load wider vehicles now.”

There is also a minor flaw as the truck manufacturer has not anticipated a spot at the front side of the vehicle, where clients could place their company’s identity signs. So “Kurbads” had to make small adjustments to put company’s logo at the truck’s front side.

Latest addition to “Kurbads” fleet is equipped with “I-Shift” transmission without gear lever – driving regime is chosen with help of four buttons in the control panel, which can be easily reached by driver.

Significant extra is the dynamic front lamps that automatically adjust the headlights to the direction of the road. This system increases view of the driver.

For improved safety, the truck has a lane changing system, which is equipped with the radar that scans the “blind” zone, when driver switches on turn indicators. If an object is fixed, driver is being warned with a sounds signal and flashing icon next to the side view mirror.

Vehicle has been given No 80 in “Kurbads” fleet. 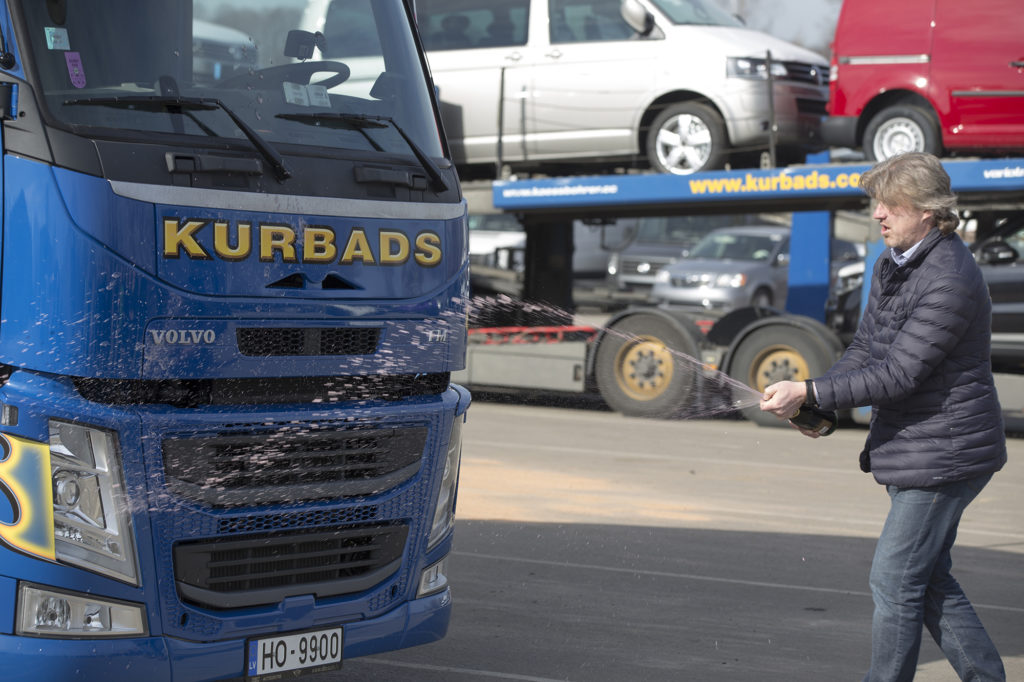