The client chose the vehicle transported by Kurbads rather accidentally: “I dreamt of Alfa Romeo for a very long time”. Historically, Alfa has stood out for its design, and this model – GTV6, particularly, with its V6 engine. Thus, choice of the particular car was related to car history and its minimalistic design. The car was bought in Finland, and, with the help of Kurbads, transported to Riga.

Four European champion titles, a role in a James Bond movie and a lousy gearbox – can you think of a crazier CV?

Alfa Romeo cars have always made the hearts of enthusiasts beat faster. Reasons may be various – from exciting design to nervous shivering, when hearing noises pointing at damages in mechanisms, where the genius of Italian engineer meets divine ignorance of repairs.

The Alfa Romeo Alfetta GT and GTV became, to a certain extent, a transitional period between the plump “alfas” of the 60s still living in post-war trends, and the switch-over to the rational front wheel drive platforms of the 90s. The car’s chassis is, so to speak, a living legend – rear wheel driven, with gearbox installed in the back (transaxle principle) and rear brake discs inside or next to the gearbox to reduce the unsuspended weight. The exotic, complicated construction was focused on one goal – balance and controllability.

Alfetta GT design, created by ItalDesign, was a real revolution within the context of the 70s, for example, compared to the model it was based on. Alfetta was technically constructed on an ordinary 1972 Alfetta sedan, but those who did not know it would never suspect these “alfas” of having something in common. The Alfetta body type – fastback coupe – was not the classic shape of a sports car from the 70s, mainly because it had a comfortable backseat. Moreover, there were even opening side windows at the back, actually, the third closest to the middle roof stand. One could almost imagine that Alfetta was ahead of the time by becoming an early sports hatchback with foldable backseats and similar features. However, it takes just opening of the Alfetta’s boot lid to find that this is not the case. Between the unusually spacious boot and the interior, fuel tank rises like a wall, whereas the very originally arranged pneumatic lid lift, situated in the middle, prevents removal of the boot lid. Despite its minor oddities, the Alfetta was considered a quite comfortable car. 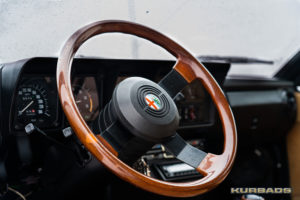 If the Alfetta GT had stuck to four-cylinder engines, this Alfa might have gone down in history as a cute and, quoting CAR magazine, “adequate” sports car. However, in 1980, along with a restyling, the Alfetta GT was equipped with a 2.5-litre V6 engine from the Alfa Romeo 6 and became the “Alfetta GTV6 2.5”, which is the car in the pictures. Despite the fact that the engine was not supposed to share the front part of the car with the gearbox, it hardly had enough space under the hood, because Alfetta was a relatively small car (4.26 x 1.65 x 1.33 metres). Since there was not enough space, the GTV6 got its own “trademark” – a hood with a hump and a plastic lid right above the injector housing, since the capricious carburettors were replaced with Bosch L-Jetronic injection system in GTV6. It did not make the car more economical or reliable, though. In one of the Gran Turismo series, Jeremy Clarkson explains that the plastic lid is necessary for the GTV6 as a cheaply-replaceable part, for when the intake housing hits the hood due to backfiring. This legend may have resulted from imagination, just like the method of keeping the clutch pressed by using a broomstick to avoid the clutch disc fusing to the flywheel. However, like the majority of Italian cars, the GTV6 definitely had its own sins, too. It is widely known for clumsy gear switching, as evidenced in a striking exchange from the same TV show:

– What was your experience with the second gear?

However, this did not prevent the GTV6 from becoming a cult classic. The car became a coupe of world-famous celebrities in 1983, when another movie about the adventures of secret agent 007 – “Octopussy” – came out. Although the GTV6 was not really the service car of Mr. Bond, the two-minute car chase scene with Roger Moore sitting at the wheel of a stolen Alfa did a better job than every commercial in the previous ten years combined. Suddenly, everybody wanted a GTV. 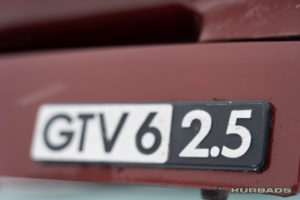 The unusual coupe boasts an impressive motor sports career. The GTV6 won the title of the European motor racing champion ETCC four times in a row (1982–1985), but Yves Loubet triumphed with this car four times in a row in Tour de Corse, Group A. Thanks to motor sports, to be more exact, to homologation requirements for the South African market, a small number of GTV6 models were even manufactured with a more voluminous 3 litre engine and a special hood with air intake.

The model transported by the vehicle transportation company Kurbads belongs to the post-facelift generation. A cluster consisting of three “clocks” and the “trinity” of liquids in the centre of the panel does not so much as suggest that the GTV6 has ever looked differently. In fact, the Alfetta GT and GTV have had at least three different front panel configurations. The most bizarre was probably the one with a separated tachometer behind the wheel and the remaining meters in a separate block in the middle. The light “leather” interior causes a misleading impression of luxury, while, suprisingly, the textile interior was considered to be more sophisticated. Eventually, GTV6 comes from the era when plastic furniture started to gradually replace chromium-plated decorations. A driver’s seat height adjustment using a telescopic pull-out lever is a touching ergonomic artefact of Italian cars. 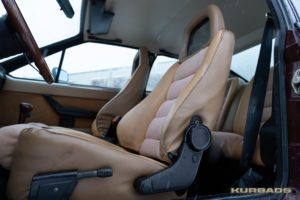 The real reason why people desire the Alfa Romeo Alfetta GTV6 2.5 is the engine. One hundred-sixty horsepower gave the car charming dynamics (it stormed from 0 to 100 km/h in 8.8 s, and Vmax reached 212 km/h) and fantastic sound. Starting the car on cold mornings is something like a religious ritual to this day since, despite the German injector, the early models were equipped with a pull-out choke. The stiff gearbox in the rear made funny noises and filled the body with strange vibration. However, that all vanished as soon as one was lucky enough to tame the clutch, switch into first gear and cross the starting line. If there was a “Busso V6” (from the legendary engineer of Alfa and Ferrari, author of the 60-degree block V6 motor Giuseppe Busso), then nothing else mattered anymore. 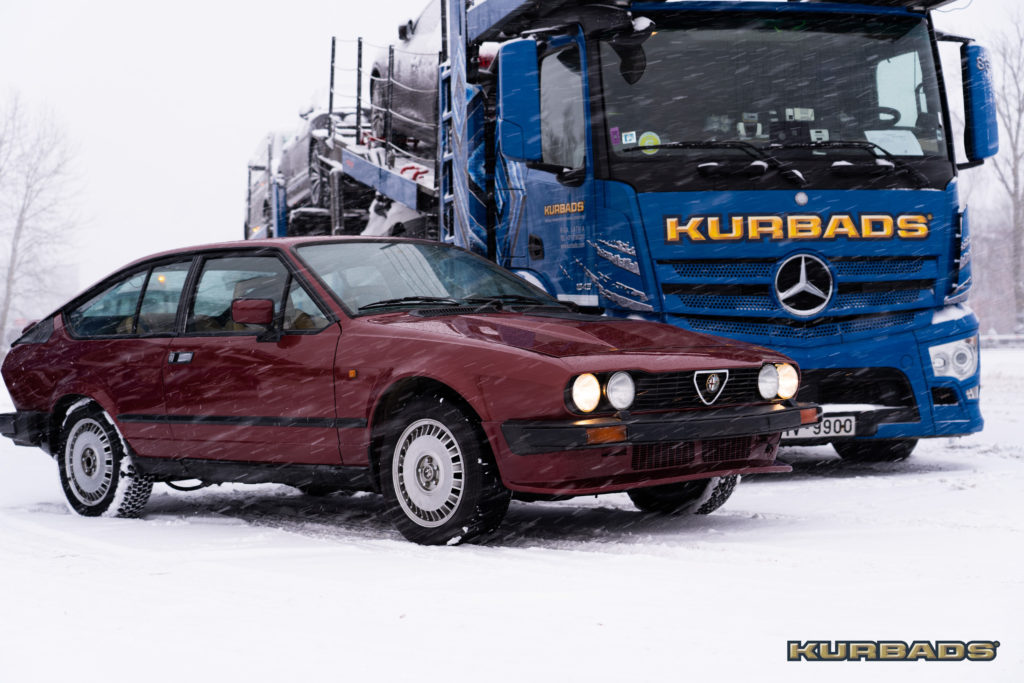 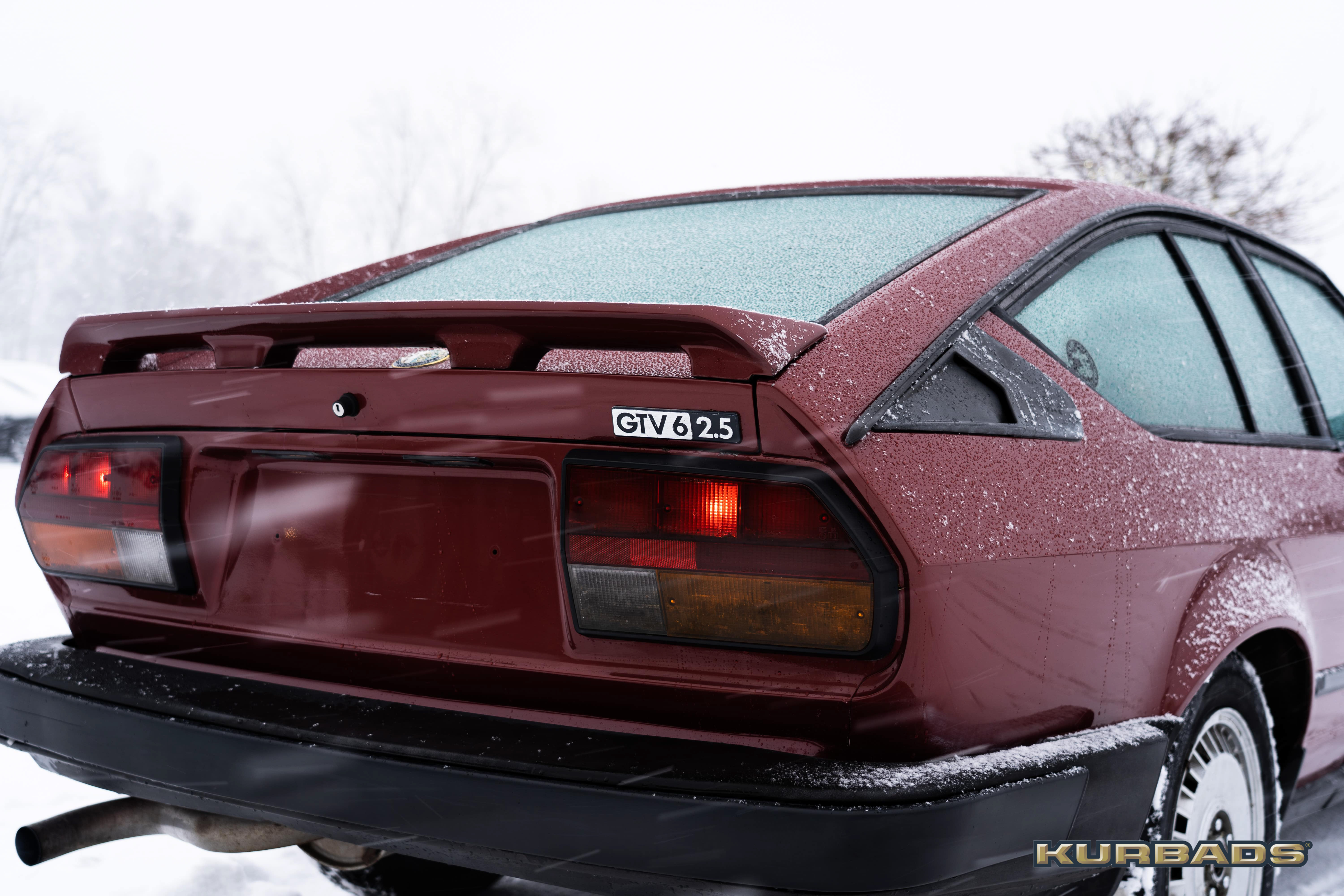 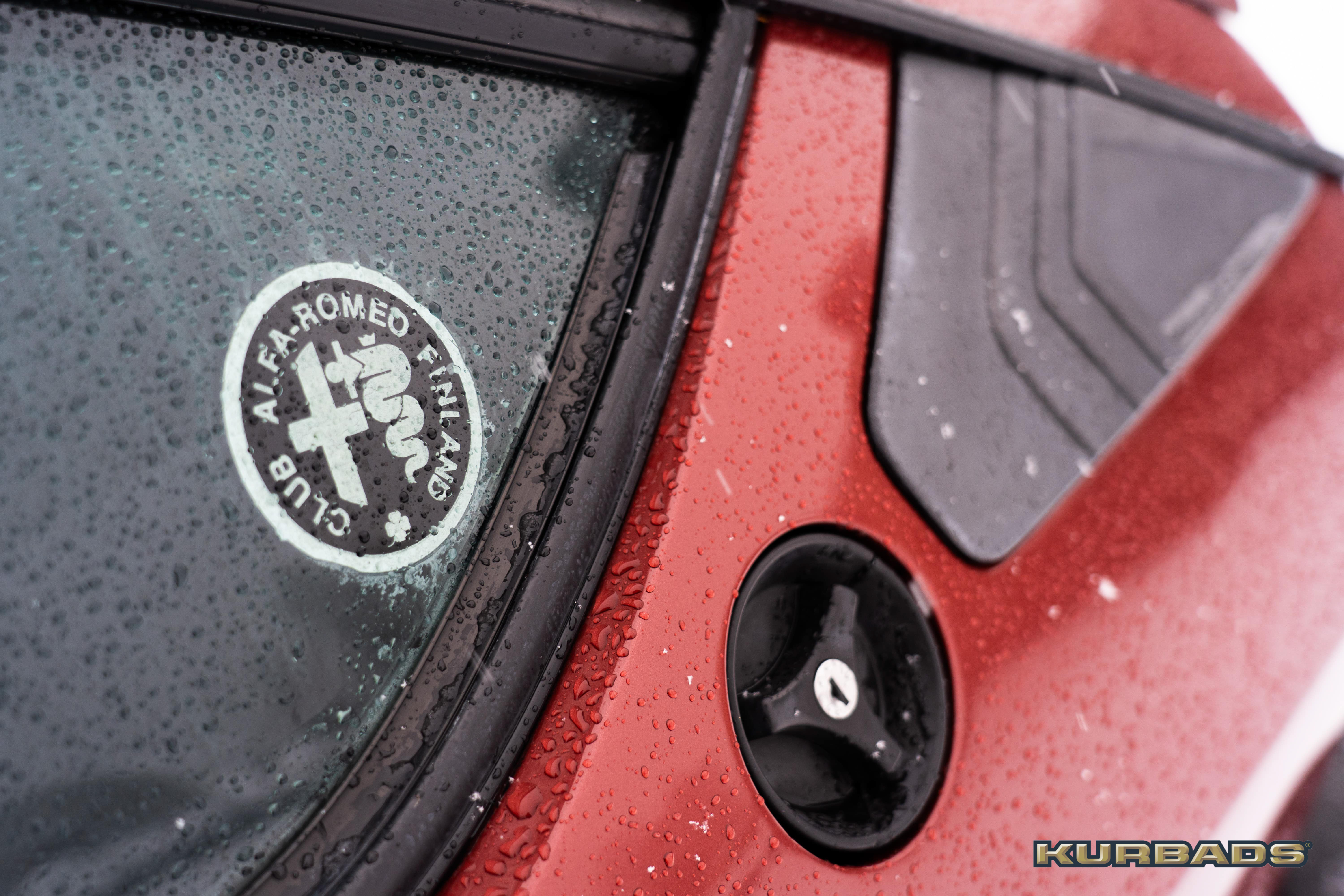 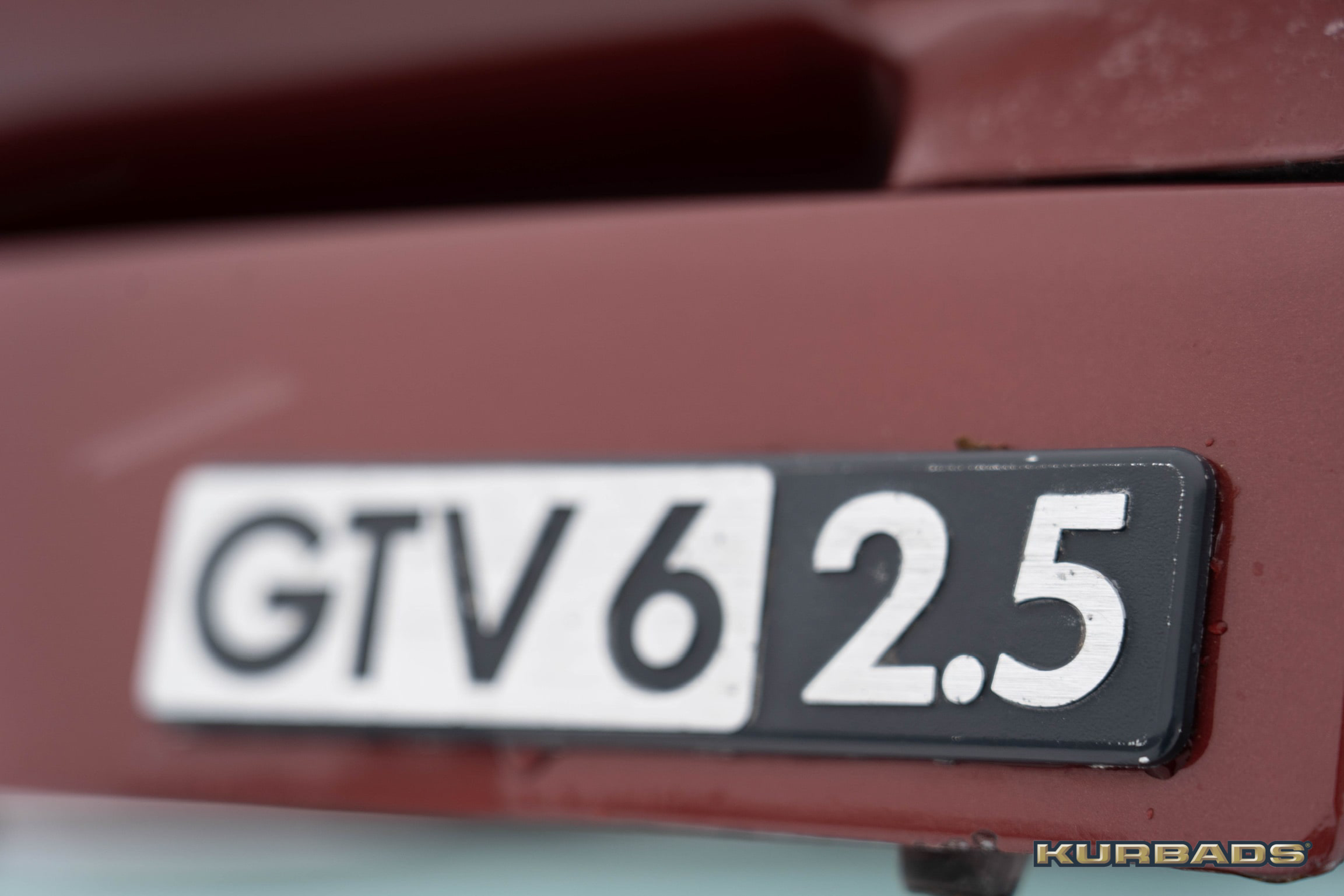 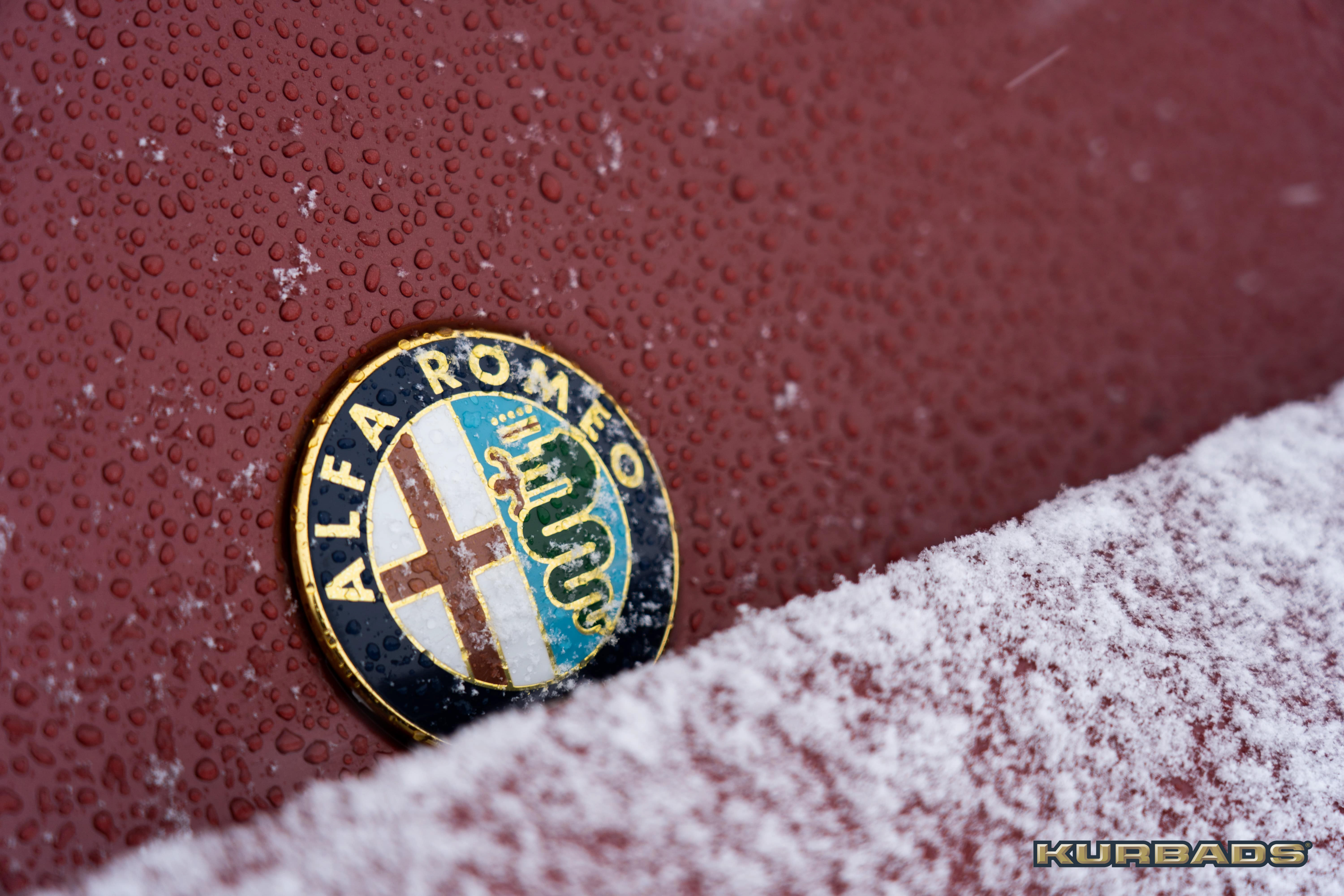 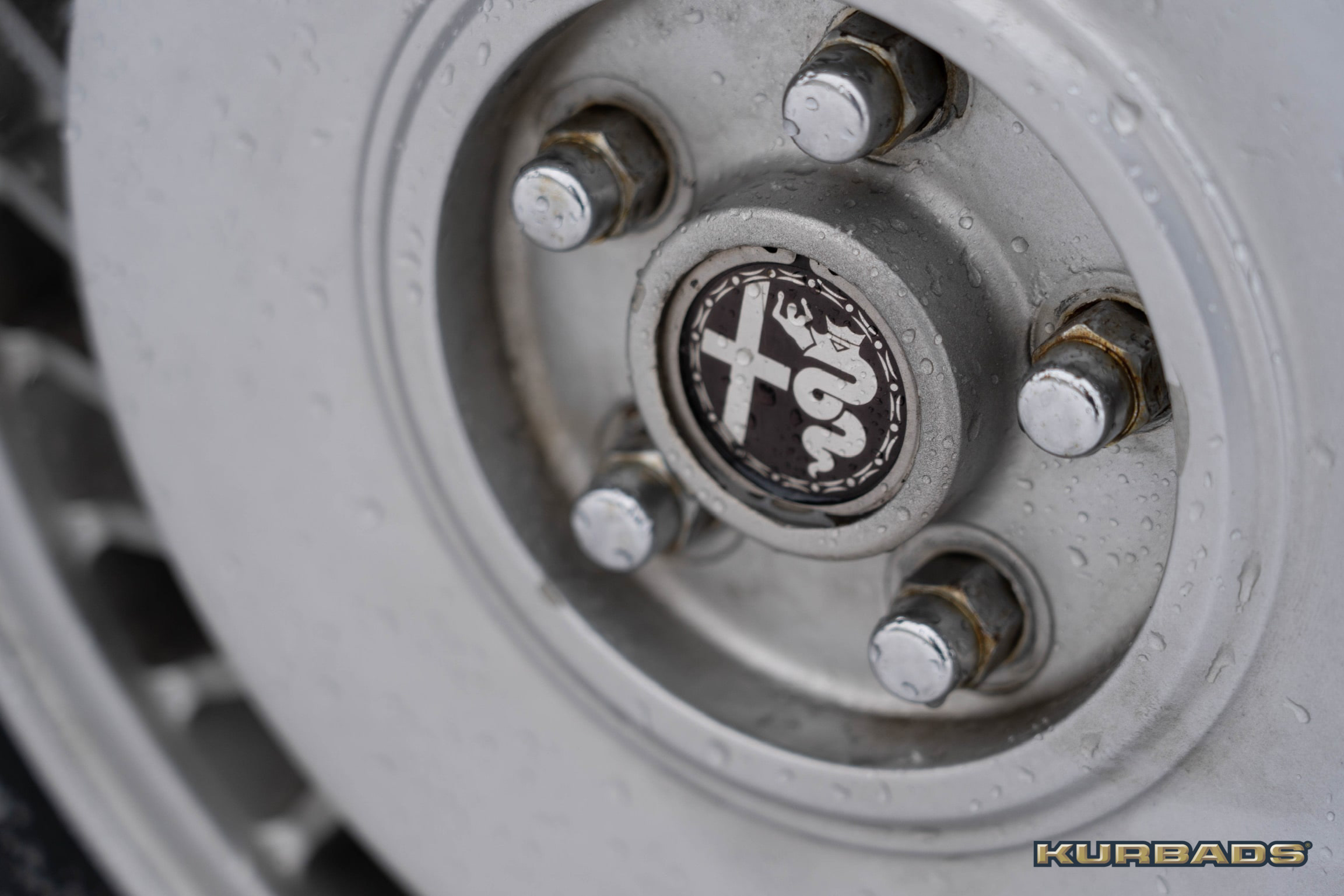 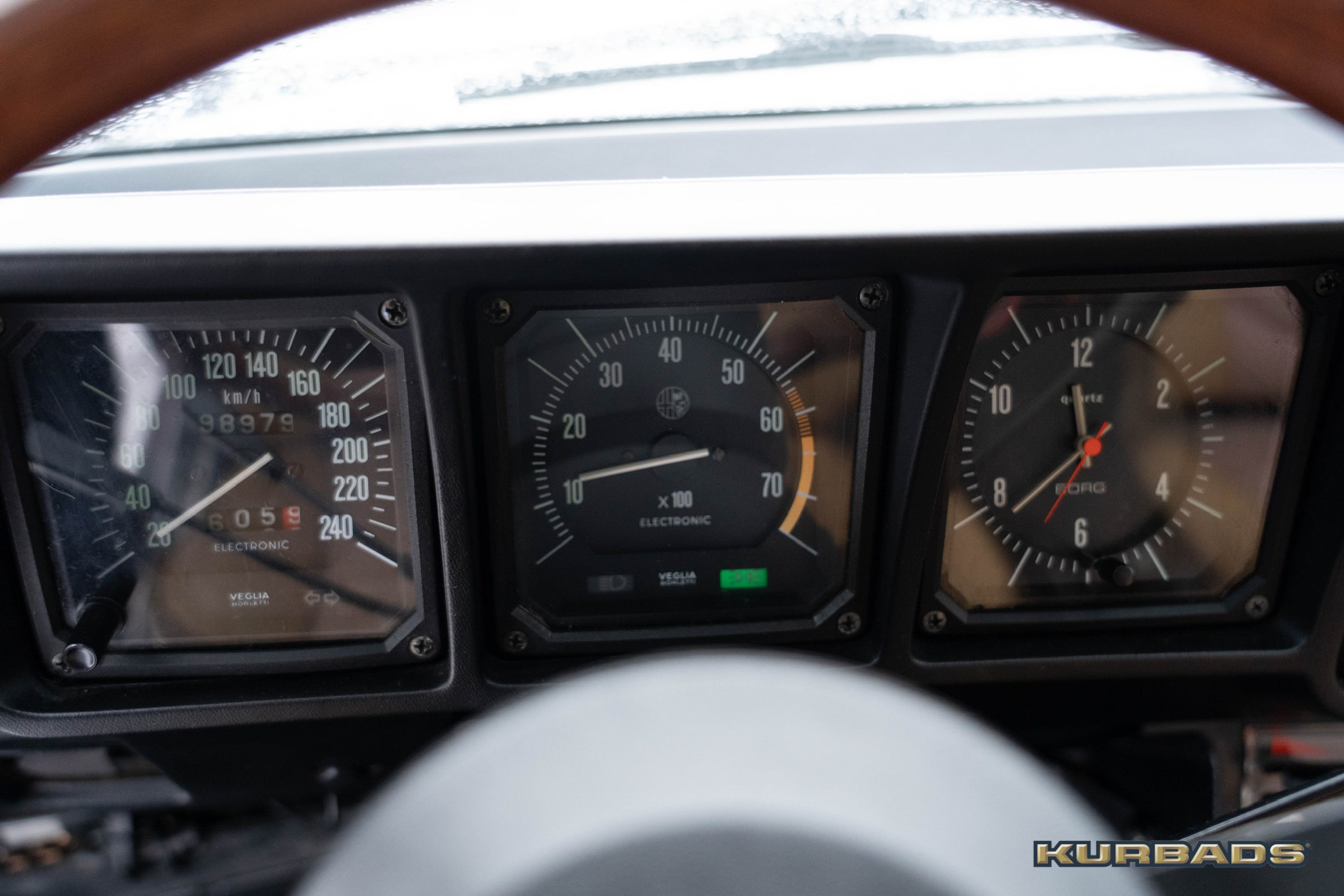 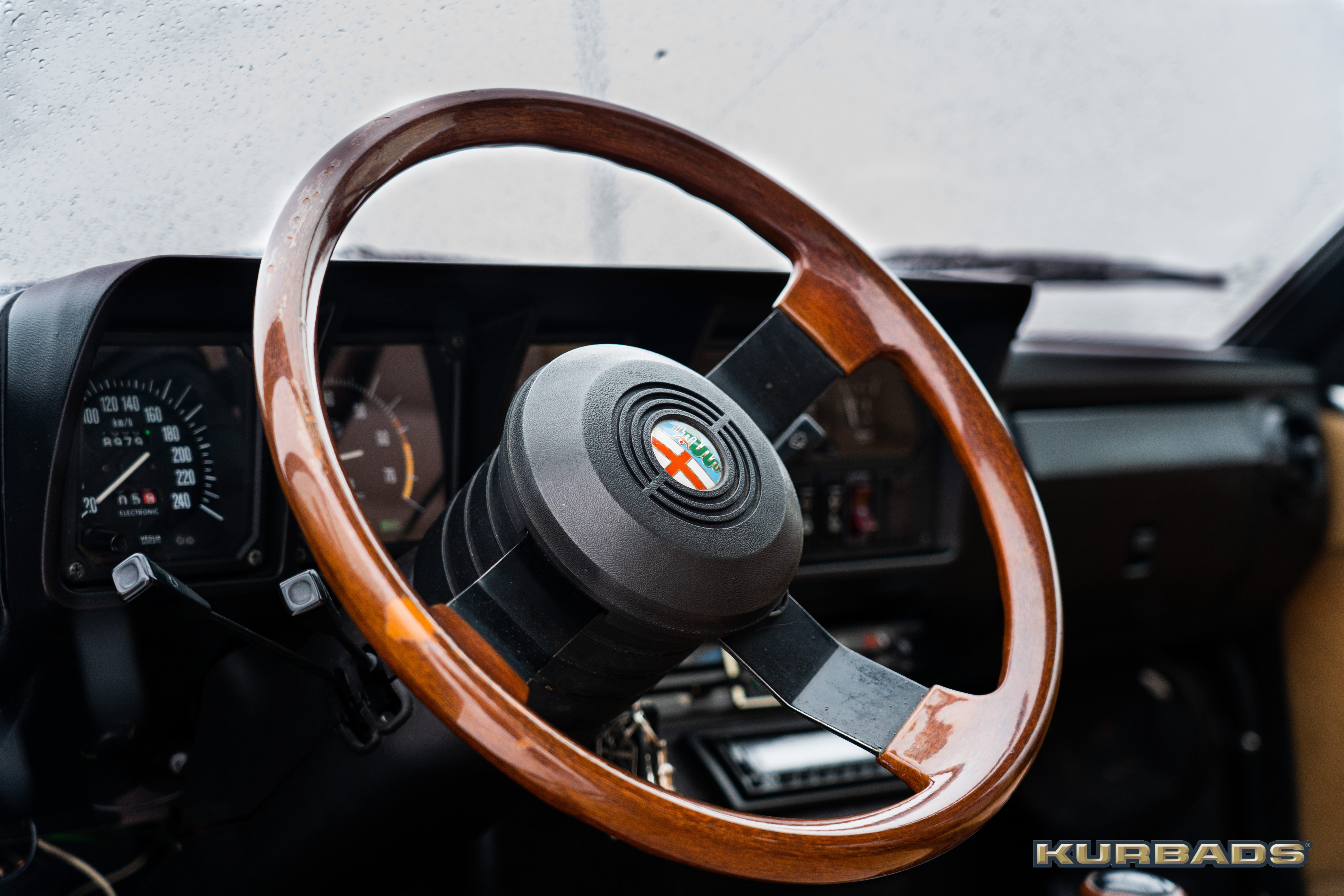 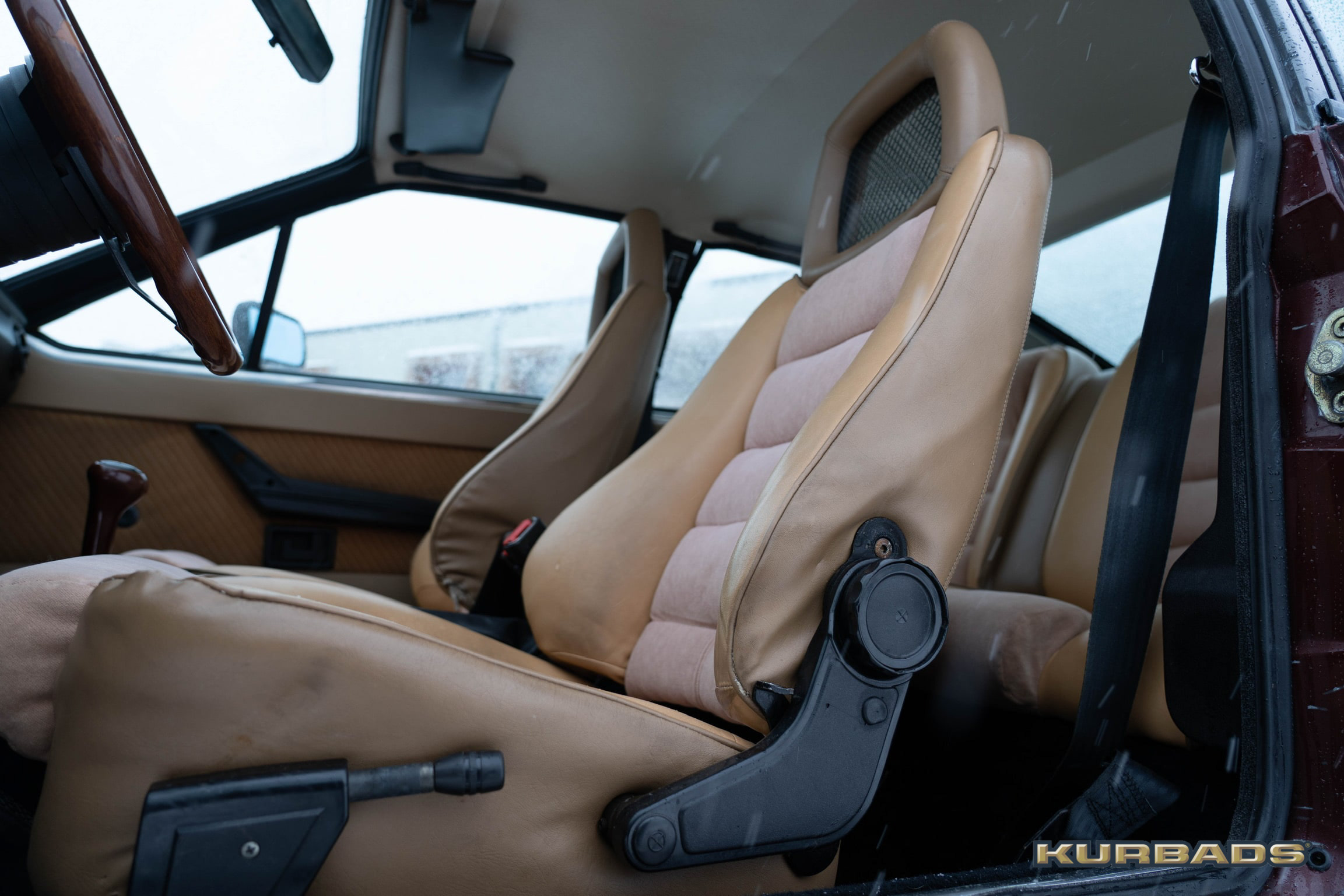 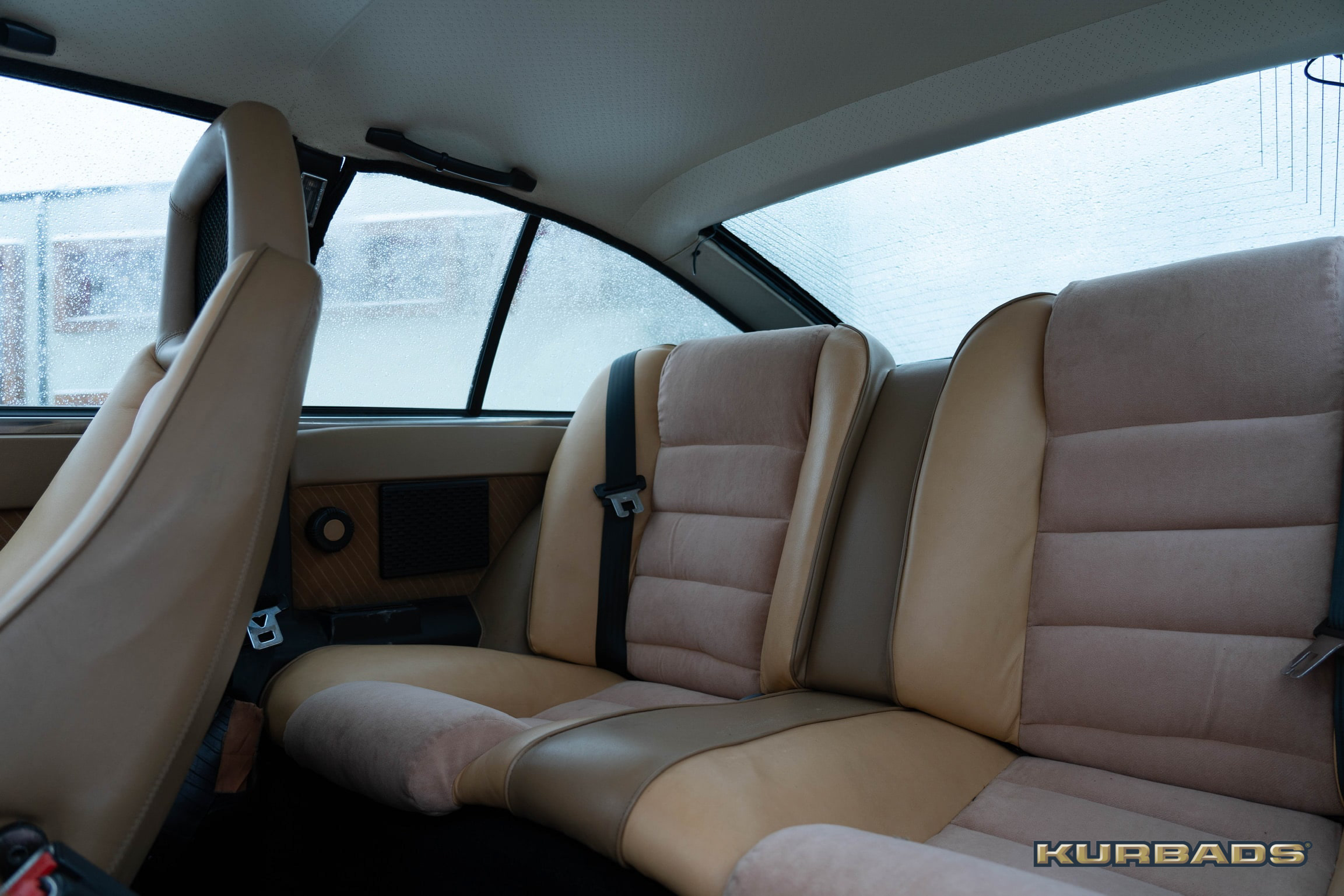