“Mārtiņš” day, a traditional folk Latvia folk day, is celebrated in mid November and by honoring cultural traditions “Kurbads” new car carrier will be adorned by Mārtiņš sign, a symbol of fire, light and prosperity. The design was developed by Latvian artist Alfreds Paulausks.

The silhouette of Mārtiņš sign reminds two stylized roosters – messengers of light. It’s also a symbol of harvest, fertility and prosperity. In Latvian folklore it’s considered as a gate that leads to something new.

Mārtiņš day marks a midpoint between autumn and winter solstices. At this time of the year peasant barns were full and ancient Gods were honored with a slaughter of a rooster.

The car carrier with Mārtiņš sign on it will be piloted on European trips by Edvīns Morkins, “Kurbads” driver who has an extensive experience by the wheel of tourist buses and agricultural machinery.

“Agricultural professionals are in the price of the gold in “Kurbads”!” says Anatolijs Vasiļjevs, driver’s quality inspector in establishment. “Ervīns comes from Bauska, the agricultural metropolis in Latvia. His previous experience with bulky vehicles is paying off as he learned the specifics of car carriers in a record breaking time.”

“Ervīns hasn’t received a single remark about technical condition of the vehicle. His fuel consumption parameters are fantastic and that’s why he gets bonuses frequently. Previous drivers with this truck had much worse results. But the main thing – Ervīns is not afraid of work!

Toms Hartmanis, logistics manager who communicates with Ervīns most often describes him in a nutshell: “Calm, precise and efficient. The cooperation is more than productive.”

The new 42nd car carrier in “Kurbads” fleet is equipped with Kaessbohrer Intago equipment. The main difference from previous Mercedes-Benz models is the inclined cabin that allows to load vehicles many different combinations.  In ‘Actros 1843’, a compromise between comfort, conductivity and grip with the road surface has been found by using the newest technologies. The cabin is built so that the driver can concentrate on the road at all times and avoid traffic accidents. 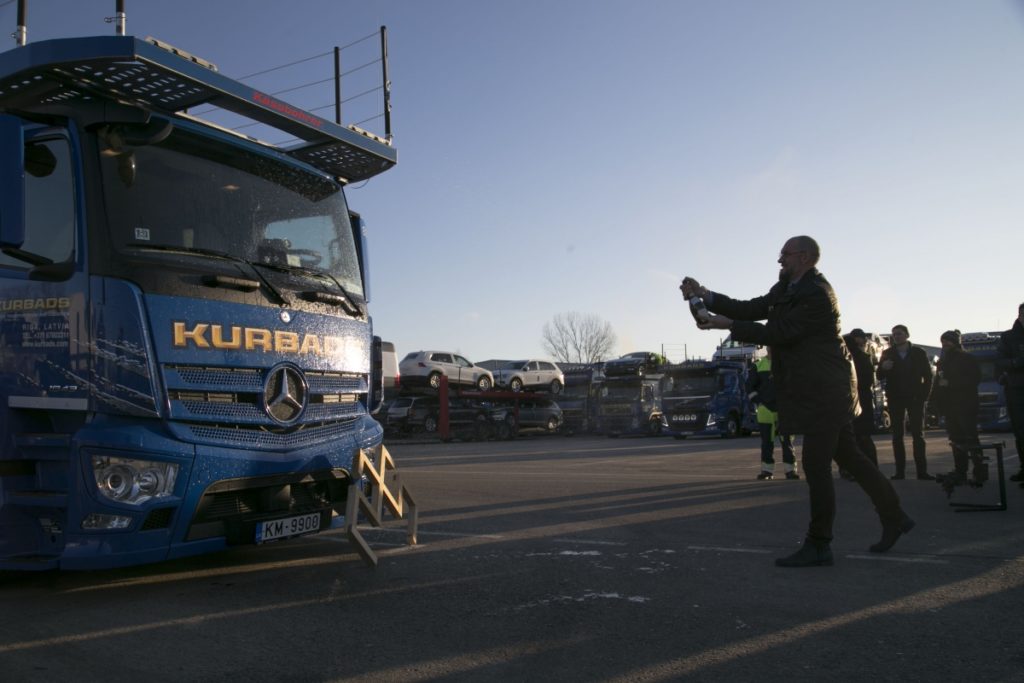