In 2017, passenger car sales in Baltics, Europe and Worldwide kept growing steadily. In some regions even surpassing all time high records of 2007.

2017 is the time of change in Latvia’s new car market; The Baltic States have an increase of two digits.

Last year, Latvia’s new passenger and light commercial transport market grew by 2%, reaching 18 934 units. As explained by experts of “Auto Asociācija”, it was a big challenge to hold the level of last year because of the changes in the law of new car registration order. Re-export (car sales outside Latvia) now is not so attractive. Latvia is a small country with a small market, so every government purchase is noteworthy. There were no purchases last year from the government, so the demand from local clients had to grow massively. And it did.

Re-export numbers were cut in half, after first registration in Latvia only 2000 cars left the country. So the number of cars that stayed in Latvia permanently grew by 12%.

Such increase has several reasons – car owners choose to buy new vehicles instead of using old cars and spending a lot of money on their maintenance. Also the conditions of leasing have become very attractive. In 2017, 62% of all new cars were bought in leasing. Share among private persons was even higher – 71% (the highest in last 10 years).

The undisputable leader of in Latvia for many years among car brands is VW with 2347 sold units, closely followed by Toyota with 2259 cars. If in 2016 the Japanese brand lost by 400 cars, then the gap last year reduced to only 88 units. It’s possible that we will see the change of a leader this year. A solid third place is held by Nissan, a leader among private buyers.

“Auto Asociācija” predicts that in 2018 the increase will be more dynamic and will surpass 20300 units of new passenger and light commercial transport vehicles.

Historically Estonia with the smallest population is the biggest new passenger car market in the Baltic States. In 2017, 29151 new cars were sold in Estonia. It’s a 7% increase. Our southern neighbors Lithuanians had a massive rise in numbers, reaching 29067 sold units, 26% more than a year before! Now, Lithuania is only a small step behind Estonia, while Latvia is several steps back.

The market of new cars keeps growing in Europe

The market of EU and EFTA (Norway, Switzerland and Iceland) countries had a firm growth, reaching numbers of pre-crisis – 15 600 000 sold new passenger cars. Four of five biggest car markets in Europe had a very good year, Germany, France, Italy and Spain had an impressive increase, while United Kingdom experienced a 5% decrease due to uncertainty about Brexit.

The biggest leap in numbers is owned by Lithuania with 27,3% increase, followed by Hungary (+20,4%), Bulgaria (+18,5%) and Croatia (+17,2%). Regarding sold units, these are small markets if we compare to the TOP5 but the growth still is very impressive and it seems that it will be at those levels also in the future. An impressive growth of 12,8% is seen among all new EU member states that joined the EU in 2004. While EU12 or Western Europe countries had only a 2,6% growth.

Also, among car brands Volkswagen cars are the most popular, 1 706 369 sold units in Europe, every ninth sold car in Europe was a VW. Car sales for VW brand in Europe continue to decline but at the same time sales volumes of SEAT, Porsche and Škoda is rising, allowing VW Group to hold the leading position. Second most sold car is Renault (1,15 million) and Peugeot (925 113).

The automobile industry is very important in the EU as 12,6 million or 5,7% of the EU employed population work in the sector.

Europe with 15,6 million sold cars is ranked third among all big markets of the World, USA is a bit upfront, but the leader for several years is China, largest economics in the world. In 2017, 24,1 million passenger cars were sold in China.

2017 was another record year for Germany luxury carmakers with Mercedes Benz, BMW, Porsche, Audi and Volkswagen selling in record numbers worldwide. German premium brands had record car deliveries in China where the gap between Audi, BMW and Mercedes Benz has narrowed to only a few thousand cars. In 2017, China accounted for more than half of all VW sales worldwide and more than a third for Audi, BMW, Mercedes Benz and Porsche.

In 2017, the USA was the only major car market with weaker sales. However, the 1.9% contraction still kept the US market near historic high levels with just over 17 million vehicles sold. Volkswagen Group brands increased sales in 2017 while Mercedes Benz and BMW sales were weaker.  Russia was the fastest growing car market while car sales were also strong in Brazil, India and Japan 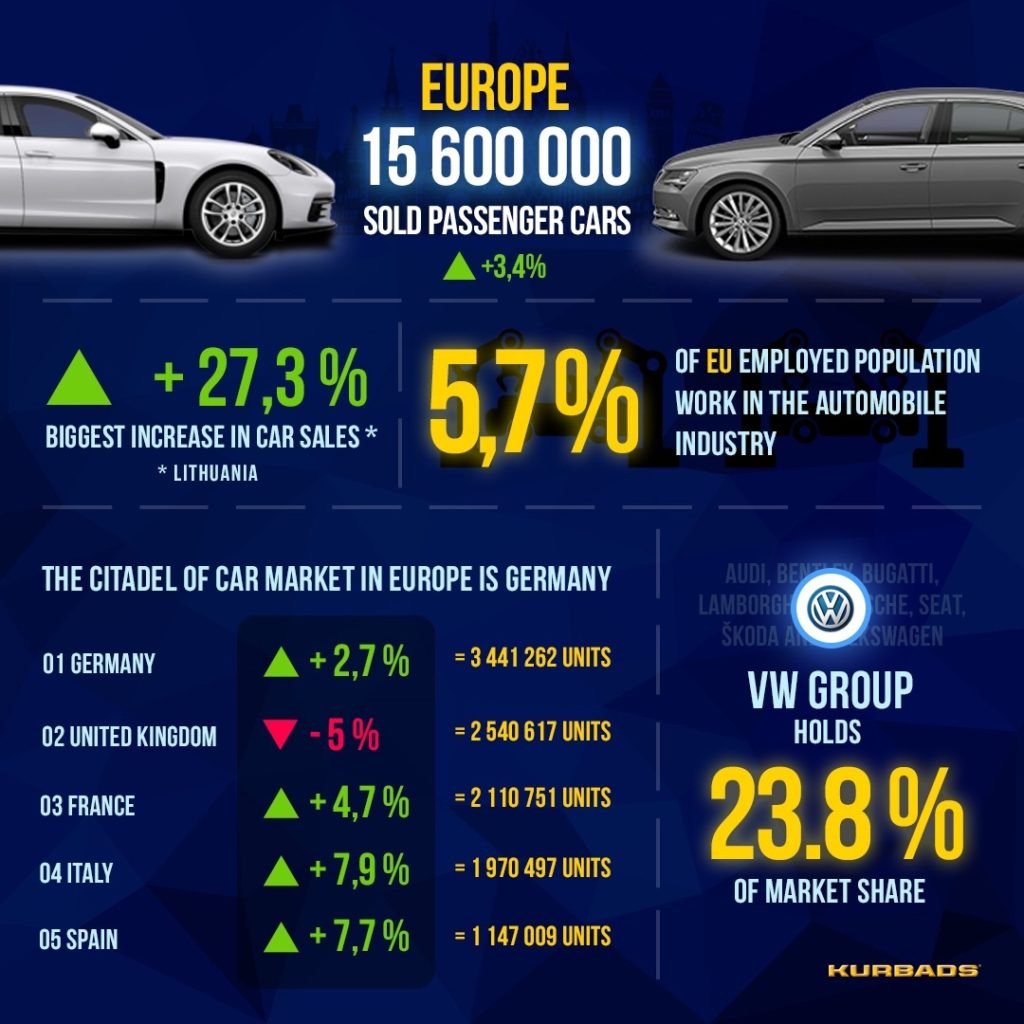