As previously said, “Kurbads” plans to increase its car park with large truck cabs. And since “Kurbads” likes challenging ideas, which are based on strong values ​​and great confidence in the message, it became clear that the next idea is to portray the Latvian female image on the 108th truck.

At this time, the 108th trailer is decorated with a significant and convincing image of the Latvian Freedom Monument, the symbolism of which often does not even require unnecessary reflection. It is important for “Kurbads” that this image of a woman is always understood across all generations and at all times. And so, the symbol of the Freedom Monument is an integral part of Latvia’s history, without which the future of our country is inconceivable.

Although work on the design of this truck began long before the world turned upside down in the form of an aggressor from our neighbouring country invading Ukraine, we think it is important not to remain silent and to continue telling this story to bring more symbolism to the world. “Kurbads” stands for dignity, solidarity, and freedom, so now we want to encourage and wish strength for Ukraine above all else!

The image of the woman or “Milda” was made in Sweden, however, when it was brought back to Latvia, Kārlis Zāle’s workshop was too small for this 9-meter-high sculpture, so he rebuilt his workplace so that the work of art could be brought inside. “It wasn’t easy for us either, thinking about how to put the sculpture on the trailer!” says Patrīcija Pikāne-Čalpa, the board member of “Kurbads” and author of the idea.

Artist and design author Alfreds Paulausks admits that he was not initially able to visually see the depiction of the Freedom Monument in this format. Realizing how important it is for “Kurbads” to realize this idea and bring a message to the world, Alfreds began working on examining, sketching, and framing different options. Alfreds also mentions that the most complicated part of the technical process is the transfer of the design from the computer program to the trailer so that it looks exactly like the artist’s sketch.

Patrīcija also mentions the fact that Kārlis Zāle was not afraid to say that the symbol of Latvian woman and freedom is the most important of all. In addition, she believes that this visualization, like the Freedom Monument itself, has demonstrated its ability to exist independently despite the political changes in the country. The author of the idea hopes that, despite the changing situation of the world, the 108th truck with Milda on the side will also be of constant value.

It is significant that the symbol of women’s freedom is held by four other symbols – guardians of the homeland, spirit workers, work, and family. These are also core values ​integrated into “Kurbads”. At no time does Patrīcija doubt the choice to put the symbol of freedom on the cabin. These values ​​permeate the daily life of every employee and serve as the path that “Kurbads” has chosen for a long time.

“Kurbads” is very pleased to hand over the 108th truck with the symbol of freedom directly to Guntars Beitāns, who has been a part of the company for more than 10 years. Andis Pikāns wishes that when people see the 108th truck on European roads, they would ask Guntars Beitāns, the driver of the trailer, who knows what this symbolism means, thus increasing the understanding of the story behind the words “For the Fatherland and Freedom!”. 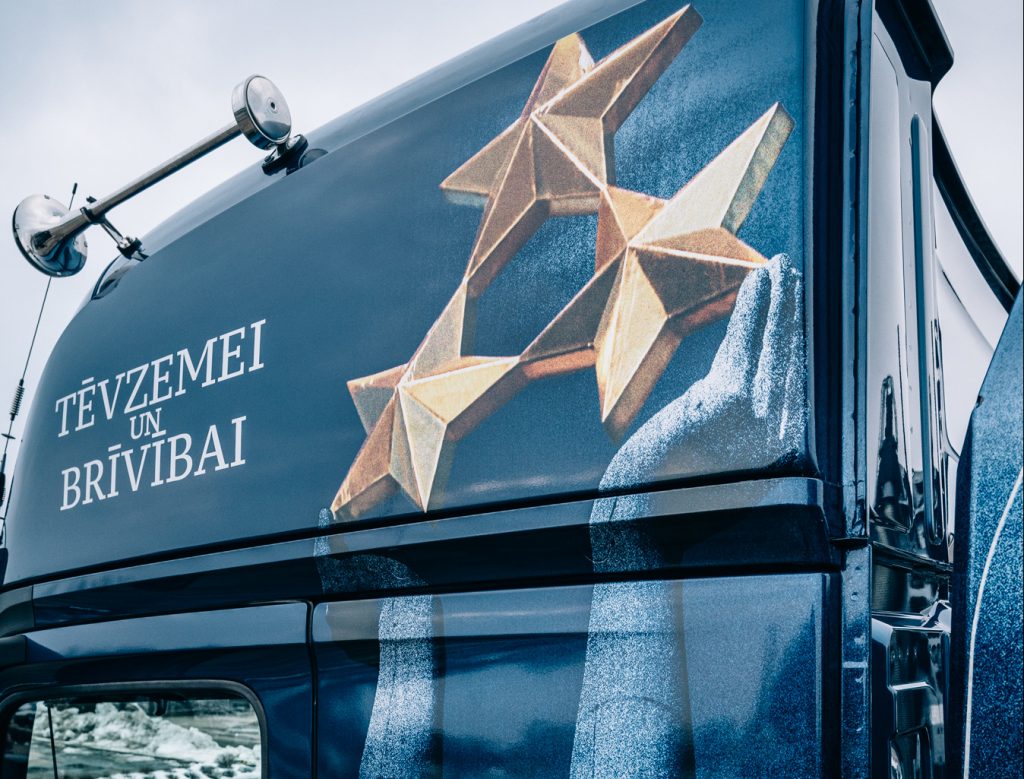