The king of snakes will adorn the new Kurbads car carrier.

Car transportation company ‘Kurbads’ continues to bring out the new Mercedes Benz car carriers with Latvian mythology themed designs. A part of the rebranding process, this car carrier number 86 is adorned by the sign of grass snake. The design was developed by artist Alfrēds Paulausks.

In Latvian mythology, grass snake symbolizes wisdom and the protection of household. It is one of Māra’s signs, because Māra has an incarnation of a snake. In ancient chronicles, it is often mentioned that grass snake represents a parallel world, a herald between the worlds of the alive and the dead. The ancient Balts honored them and put out milk for grass snakes near their homes.

Grass snake is seen as the king of snakes so it is often depicted with a golden crown on its head.

The new ‘Kurbads’ car carrier Mercedes-Benz ‘Actros 1843’ will be led by Normunds Pelšs, who has earned this right with quality work. Normunds comments on his new car carrier: ‘It is very pleasant to drive in a completely new car carrier. I still have a lot to learn in the new system and I have to get used to this rhythm of driving- I have only done a small distance in this truck so far. I think we will make a strong tandem!’

‘Just like the grass snake, Normunds symbolizes knowledge! He is hard working, quick-witted and effective in his job. He is one of the best car carrier drivers if we take into account the kilometers a driver covers in a month. He deserves this new truck,’ Anatolijs Vasiljevs, ‘Kurbads’ driver’s quality inspector, praises the driver.

‘Kurbads’ truck #86 is equipped with Kaessbohrer Metago and Variotrans transport systems. The truck weighs 18 tons and has the power of 430HP.  In ‘Actros 1843’, a compromise between comfort, conductivity and grip with the road surface has been found by using the newest technologies. The driver can enjoy a feeling of space and comfort in the cabin. The cabin is built so that the driver can concentrate on the road at all times and avoid traffic accidents. 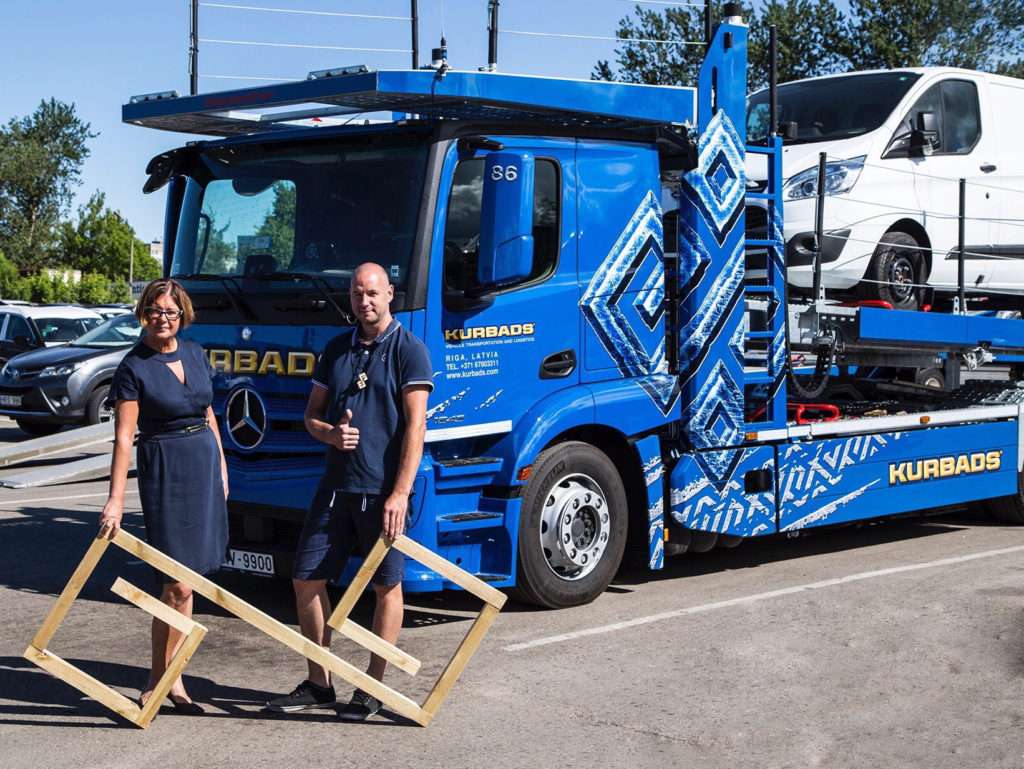